What Does Reshoring Mean for Us?

By Jeff Jagosh and Christopher Steele

Re-shoring: It’s a term that’s thrown around quite a bit, and certainly there is new manufacturing activity that is happening in North America. However what does the term really mean, what are the implications for American communities, particularly those that have significant investment in logistics and global trade?

Jan Rivkin of the Harvard Business School speculated in a December 2014 article with the Economist Intelligence Unit[1] that the change in the cost arbitrage between North America and developing nations has quite a lot to do with it.  Rising wage levels over there and lower energy costs over here have made the financial calculus very different to what it had been just a few years ago.  Professor Rivkin also noted that companies that did offshore are also discovering the hidden difficulties inherent in offshoring.  Supply chain risk, loss of nimbleness, and intellectual property risk are all playing a part in companies rethinking where they make things.

The implications for North American communities are different depending on whether they have been more traditionally manufacturing based, or whether they instead make their economic life from global trade.  Logic suggests that the former should be on the ascendant and the latter looking for ways to diversify.

Mexico – The Land of Opportunity

As an example of what kinds of opportunities might be open to North America, it’s useful to first look at the nation that has benefitted most from this overall change in Calculus: Mexico. 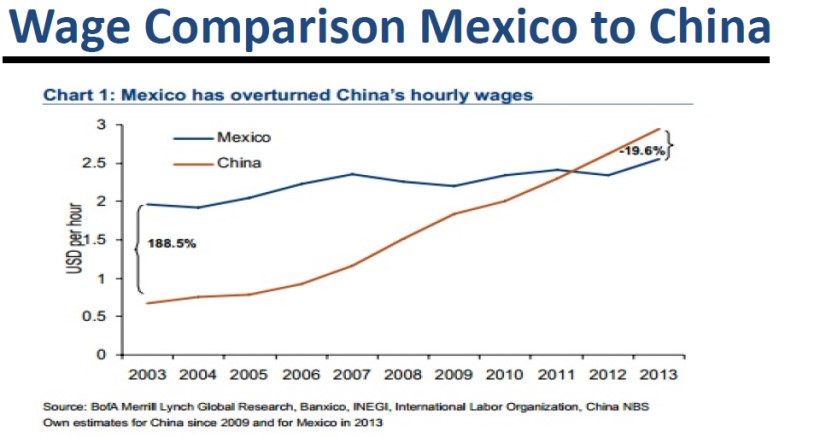 For more than a decade, Asia has been one of the world’s most cost-effective manufacturing regions.  However, the cost of production in Asia continues to rise, particularly in China.  Coupled with long lead times in Pacific Ocean freight many companies are turning to Mexico as they re-think their supply chain.

Bloomberg: “for the first time in recent history it is cheaper to manufacture in Mexico than in China for Companies targeting the US market”.  According to studies performed by HSBC Global Research, they expect Mexico to displace China as the top U.S. trading partner by 2018.  As shown in the graph, Mexico’s fully loaded manufacturing salaries registered US $2.10 per hour in 2011 up from US$1.72 in 2001, a 19% increase.  In contrast China had an average wage at US $1.63 in 2011 from US $.0.35 in 2001.  That’s nearly a four times increase in labor costs.

Mexico’s shipping cost and transit time per cubic foot to Chicago are also significantly lower.  For example, marine and ground costs from Shanghai are about $2.19 and take roughly 25 days.  The same situation by truck from Monterrey Mexico is $0.91and 4 to 5 days.  By rail, Mexico is even more cost competitive (at a slight loss of speed):  $0.40 in 6 to 7 days.[2]  With the changing landscape in the global supply chain, cutting all the extra miles and reducing warehouse operating costs is crucial to success.

Implications (and Opportunity?) for the Pacific Northwest

On first glance, it might be hard to see how a Pacific-facing port-oriented region would benefit from having activity return to North America.  Nonetheless, here in the PNW we have seen over 4,500,000 square feet of warehouse space absorption in 2014 to 1Q15.  This absorption helped fuel over 6,000,000 SF of new class A development since 2013 to present.   This is even in the face of further threats, ie; driver shortage, Panama Canal expansion, the 2014- 2015 slowdown, etc.

Speculation has been strong however that for the same reasons that manufacturing has returned from low labor-cost Asian locations, very low labor-cost locations in North America may also not be as dominant in this new trend.  Instead, regions which have very strong labor efficiency and a highly skilled workforce might be the greatest winners in the new trend.  Previous rankings have noted this and have specifically noted the Seattle area as strong contenders in this changed economic playing field.[3]

The implications for real estate are still somewhat unknown, other than to say that there will be renewed demand for industrial and warehouse space.  The broader lesson is that landlords, site selectors and brokers alike will need to be sensitive to the needs of a different kind of user, will need to be flexible, and may wish to look to incentives like FTZ, tax credits, lower energy costs, better proximity to the intermodal and other programs to build competitive advantage.

Christopher Steele is global COO and the North American President of Investment Consulting Associates, a business consulting firm specializing in location strategy, site selection, and business attraction.  He may be reached at chris@ic-associates.com or you may follow his tweets at @icanortham.

Jeff Jagosh, SIOR is President of Site Selection NW, a logistics and warehouse site selection and lease negotiation company based in Tacoma Washington.