I don’t think you’ll be driving the new electric Tesla Semi to the moon and back, but speculation is growing about the payload and savings on diesel fuel it is supposed to deliver. 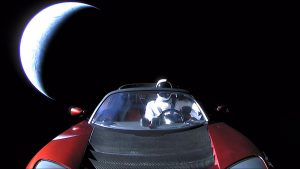 ” . . . a typical “day cab” configuration 18-wheeler with a diesel engine weighs roughly 32,000 pounds with a relatively lightweight box trailer attached and full fuel tanks. That leaves about 48,000 pounds of freight capacity for the truck. That’s important because, although the truck won’t be loaded to capacity every time, it will be expected to be capable of carrying up to about that weight. Most big rigs on the road are capable of hauling 44,000 or more pounds worth of freight, depending on configuration and trailer type.” – https://www.teslarati.com/how-much-tesla-semi-truck-battery-pack-weigh/

Generally, if the new electric Tesla Semi is anything like the standard electric vehicles there will be no need to replace oil, fan belts, air filters, timing belts, head gaskets, cylinder heads and spark plugs. Also, one of the big savings with electric cars is brakes. The motor itself acts as a brake. Savings are accrued by less maintenance, fewer components, and no fuel costs.

Fred Lambert, Editor in Chief and Main Writer at Electrek says, “Elon Musk is ‘optimistic’ about beating Tesla Semi specs that competitors already don’t believe possible.” He also says, “Tesla estimates a payback period of about 2 years thanks to gas and maintenance savings.”

Supposedly the Tesla Semi has eight charging ports. A half hour of charging provides enough power to motor on down the road about 400 miles. So, in the time it takes to order and consume a chicken fried steak at a roadside diner, the rig can be ready to roll.

Tesla is still running tests and improving most aspects of the vehicle. Tesla’s all-electric Semi was spotted early February 28th on the interstate highway heading toward Tesla’s Nevada factory. The rig was making less noise that an earlier model, but still had the expected whine of the four Model 3 electric motors that power the vehicle. Sounds like it’s ready to roll.