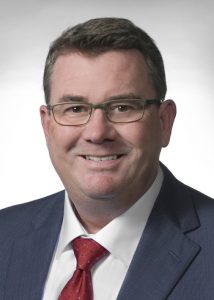 Eric Johnson was named the Port of Tacoma’s executive director in June 2019. He sets the organization’s vision in creating a new strategic plan for the Port.

Prior to joining the Port of Tacoma, Johnson served as the executive director of the Washington Public Ports Association since January 2009. In that role, he represented port district interests to state and federal elected officials, including the Washington legislature and state agencies.

In addition to government relations, he was responsible for numerous specialized seminars and conferences. His duties also included advising Washington’s 75 port districts on issues relating to governance, operations, planning and strategy.

Johnson joined the Washington Public Ports Association in 1988 as the environmental affairs director, where he developed many of the fundamental environmental laws and policies that are still in place today for ports across the state. He was promoted to deputy director in 2006.

He is a native of Pierce County and holds a bachelor’s degree in biology and political science from Pacific Lutheran University. He also has a master’s in public administration with a concentration in environmental policy and natural resources management from the University of Washington.