Large ships such as container ships, tankers, bulk carriers, cruise ships, and Lakers are significant contributors to air pollution in many of our nation’s cities and ports. There are two types of diesel engines used on large ships: main propulsion and auxiliary engines. The International Maritime Organization (IMO) facilitates development of standards to control air exhaust emissions from the engines that power ships. T 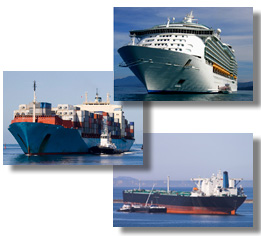 he IMO is the United Nations agency concerned with maritime safety and security and the prevention of marine pollution from ships.

On March 26, 2010, the IMO officially designated waters off North American coasts as an area in which stringent international emission standards will apply to ships. These standards will dramatically reduce air pollution from ships and deliver substantial air quality and public health benefits that extend hundreds of miles inland.

In practice, implementation of the ECA (Emission Control Area) means that ships entering the designated area would need to use compliant fuel for the duration of their voyage that is within that area, including time in port as well as voyages whose routes pass through the area without calling on a port. The quality of fuel that complies with the ECA standard will change over time. From the effective date in 2012 until 2015, fuel used by all vessels operating in designated areas cannot exceed 1.0 percent sulfur (10,000 ppm). In most cases, ships already have the capability to store two or more fuels. However, to meet the 2015 requirement of 1,000 ppm fuel sulfur, some vessels may need to be modified for additional distillate fuel storage capacity. As an alternative to using lower sulfur fuel, ship operators may choose to equip their vessels with exhaust gas cleaning devices (“scrubbers”). In this case, the scrubber extracts sulfur from the exhaust.

You can access the U.S. proposal and related documents on EPA’s Office of Transportation and Air Quality Web site at: www.epa.gov/otaq/oceanvessels.htm