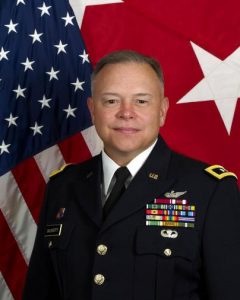 Major General Bret D. Daugherty was appointed as the Adjutant General of Washington on July 28th, 2012. As the Adjutant General, he is commander of all Washington Army and Air National Guard forces and Director of the State’s Emergency Management and Enhanced 911 programs. General Daugherty also serves as Homeland Security Advisor to the Governor of Washington and as State Administrative Agent for all United States Department of Homeland Security grants awarded to Washington’s state, local, tribal and non-profit agencies and organizations.

General Daugherty attended Seattle University where he was awarded an Army Reserve Officers’ Training Corps scholarship. Upon graduating as a Distinguished Military Graduate in June of 1980, he was commissioned as a Regular Army Second Lieutenant. He left active duty in 1989 and joined the Washington Army National Guard in 1990.