American gangsters have found that prostituting minors is a source of prestige and income. Human traffickers have discovered that American children are easier to recruit and sell than foreign victims because there is no need to cross the border. Both innocent young males and females can be abducted right off the street. Threatened and doped these young victims become sex slaves and income sources for these criminals. It happens everyday here in America… and also right here in Washington.

National Statistics on Domestic Sex Trafficking:
+ According to the National Center for Missing and Exploited Children (NCMEC), 100,000 to 293,000 children are in danger of becoming sexual commodities.
+ The U.S. Department of Justice Child Exploitation and Obscenity Section reports 12 is the average age of entry into pornography and prostitution in the U.S.
+ According to Shared Hope International, eight of the 112 minors trafficked from out-of-state into Nevada for prostitution between August 2005 and December 2006 were from Washington State. http://atg.wa.gov/sex-trafficking 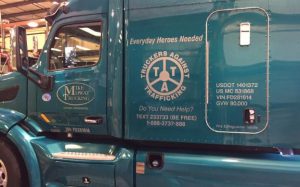 The organization Truckers Against Trafficking is leading the fight against trafficking by asking truckers for assistance. Truck producers, trucking companies and many other transportation related groups are donating time, money, and energies to help. Truckers can spread the news by placing information on their vehicles and taking individual action when they see potential victims.

Recently, Helen Van Dam, the Freedom Drivers Project Director of Truckers Against Trafficking, visited Washington State. She said, “By invitation of the Washington State Patrol TAT and our Freedom Drivers Project, mobile exhibit attended the Washington State Inspector’s Challenge and the Washington Trucking Association’s Truck Driving Championship. We spoke to all competitors about the reality of domestic sex trafficking and the vital role they play in helping to end this heinous crime. Attending these events not only provides a wonderful opportunity for TAT to celebrate the best of state patrol and trucking in the state but also allows us to educate and empower individuals to take a second look and make the call that can save lives.”

“The Freedom Drivers Project (FDP) is a first-of-its-kind, mobile exhibit serving as a remarkable tool to educate members of the trucking industry, law enforcement and general public about domestic sex trafficking and how the trucking industry is combating it. From the compelling exterior imagery on this 48-foot trailer to the interior’s video monitors and actual trafficking artifacts from women and children who had been enslaved by traffickers, this trailer serves as a powerful education tool for many. It also celebrates the real Truckers Against Trafficking who are working to drive change in this area, and connects deeply with visitors, both intellectually and emotionally, to drive greater awareness about the problems and the simple action steps anyone can take to help.”

Janet Runbeck, president of the local Soroptimist Club in Tacoma, which has been fighting trafficking for the last two years as one of their main projects, was assisting at the mobile exhibit. She was helping by giving out TAT wallet cards with the phone number to report suspicious activity. She was encouraging drivers to watchout for kids in unsafe places. A man approached her. Runbeck revealed a simple confession of a truck driver viewing the display, “He shared his own experience. He told me he had been sexually abused as a child. He wants to prevent other kids from that trauma in any way he can.” That’s the impact of Truckers Against Trafficking… our everyday heroes.