A container-on-barge and rail shuttle service in the Pacific Northwest is preserving the ability of exporters of agricultural and paper products in the region to serve their customers in Asia since the Port of Portland lost well over 90 percent of its container volume earlier this year due to a prolonged labor dispute.

Participants in the Upriver Container Barge-Rail Shuttle include Northwest Container Service, Tidewater Barge and the ports of Morrow, Oregon, Lewiston, Idaho and Portland. The first barge is scheduled to leave Lewiston on Thursday.

The International Longshore and Warehouse Union in 2012 slashed crane productivity in Port- land and engaged in other forms of work slowdowns during a labor dispute with International Container Terminal Services Inc., which operates the port’s only container facility, Terminal 6. The jurisdictional dispute with another union involved the equivalent of two jobs, and then escalated to create a toxic atmosphere in the port over the ensuing two and one-half years.

When it became apparent that the ILWU hard-timing could continue indefinitely, Hanjin Ship- ping Co. and Hapag-Lloyd ended their weekly services to Asia, forcing exporters in the region to shift to the Northwest Seaport Alliance of Seattle and Tacoma. Portland’s container volumes plunged from more than 10,000 twenty-foot-equivalent units each month in 2014 to 614 TEUs in September, according to numbers published on the website of the Pacific Maritime Association. Westwood Shipping, which has a monthly service to Asia, is the only liner company left in Portland.

However, the Oregon, eastern Washington and Idaho region has a healthy export trade that includes peas, beans, lentils, hay, paper products and scrap metal. In order to maintain cost competitive inland transportation in the region, participants in the barge-rail service are now providing service to Seattle and Tacoma.

Empty containers are carried by barge to the Port of Lewiston, where they are loaded with agricultural and paper products and then sent by barge to the Port of Morrow. Those cargoes are combined with Oregon agricultural and paper products and taken by train to the Northwest Container Service yard in Portland. From there, the exports are exported to Asia on Westwood vessels, or the containers continue by rail to Seattle and Tacoma for shipment to Asia.

Oregon Gov. Kate Brown, who recently returned from a trade mission to Asia, said there is a growing interest there for products from Oregon, especially agricultural products, and the key is to get the shipments to Asia in a cost-competitive way. Barge/rail service is less costly than over-the-road trucking to Seattle and Tacoma.

Although the barge/rail shuttle will help to keep exporters and importers in the region competitive, the Port of Portland continues to meet with shipping lines and hopes to attract weekly liner services to the port. Bill Wyatt, Portland executive director, said that the creative thinking of the barge and rail operators is only a partial solution. 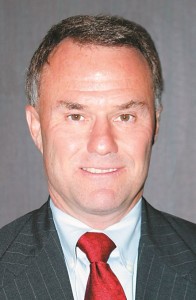 “We hope the success of this plan will entice labor and terminal management to come together in agreement sooner,” and for resumption of frequent, regular container service, he said. The Portland region generates about 336,000 TEUs a year and could support two weekly trans- Pacific services to key markets in Japan, China and Korea, Wyatt said. Resolution of the productivity issues at Portland’s T-6 container terminal will be critical to recruitment of new services, he added.

This article was written by Bill Mongelluzzo, who was our November speaker and reprinted from the Journal of Commerce with their approval.