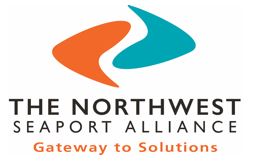 The Northwest Seaport Alliance was presented with the 2019 Company of the Year Award by the Transportation Club of Tacoma (TCT) at the club’s luncheon meeting held Jan. 13. More than 100 people attended the meeting.

Thomas recognized the NWSA for being the fourth largest container gateway in North America and a major economic engine in the Pacific Northwest–supporting more than 58,000 jobs in Washington state.

He also cited the NWSA’s efforts to improve transportation networks, including its work and investments in projects such as Port of Tacoma Road and SR 167. In accepting the award, NWSA CEO John Wolfe told the audience, “It takes a team effort by everyone in this room to make this gateway work so well, so thank you all. We are honored to receive this award today.”

Congratulations Northwest Seaport Alliance for being awarded the 2019 TCT Company of the Year!

COMPANY OF THE YEAR CRITERIA

Since 2000, TCT has been awarding outstanding organizations the designation of Company of the Year. The following is an attempt to formulate criteria going forward to assist those that need to make future decisions. These are not weighted criteria but are meant to be adhered to guidelines.